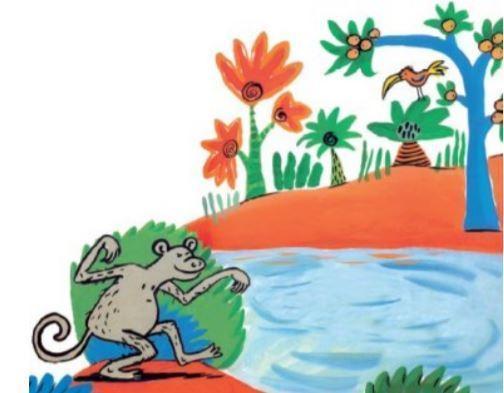 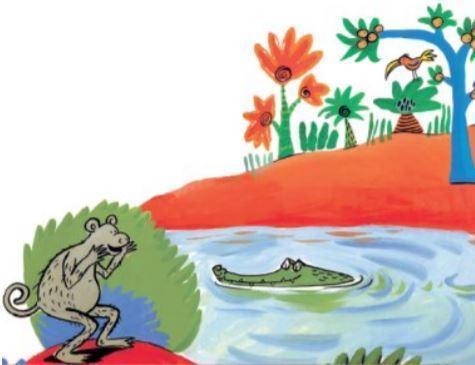 How to Count Crocodiles

Once there was a monkey who was always up to tricks and getting into mischief.

One morning Monkey came dancing down to the river. The first thing she saw, way over on the other side, was a mango tree laden with greeny-yellowy-orange mangoes.

Just looking at those mangoes made her feel hungry.

1. What fruit was growing on the tree? Tick one.

“I must have some mangoes!” she said. “I must!
But how can I cross to the other side?”

Monkey sat and she thought. And then … she saw a dark snout and two slit eyes, floating down the river.

“That’s Old Snapper-jaws, if I’m not mistaken,” she said. “He could be useful.” She called out, “King Crocodile!”

3. What would Monkey have to do to get the mangoes?

a) cross the field

b) cross the road

Crocodile lifted his head out of the water.
“I have been thinking,” said Monkey. “There are lots of crocodiles
living around here. But I bet there are more monkeys. Lots and lots more.”
“Not true!” said Crocodile. “There are lots more crocodiles than monkeys!”

a) because he didn't understand

b) because he didn't agree

c) because he had counted them

d) because he was king

4. Who said there were more crocodiles that monkeys?

“We could do some counting,” said Monkey, “and find out.”
“And how could we do that?” asked Crocodile.
“Well,” said Monkey, “you could go up and down the river and tell all the
crocodiles to come here. Then I could do the counting.”
“After that, you could get all the monkeys to come,” said Crocodile, and he
grinned. “And we could ea … ooops ... I mean count them.”

5. What did Monkey want Crocodile to do?

6. Why did Crocodile grin? Tick one.

a) to show his teeth

b) to show he could count

c) he thought Monkey was funny

d) he thought he could eat the monkeys 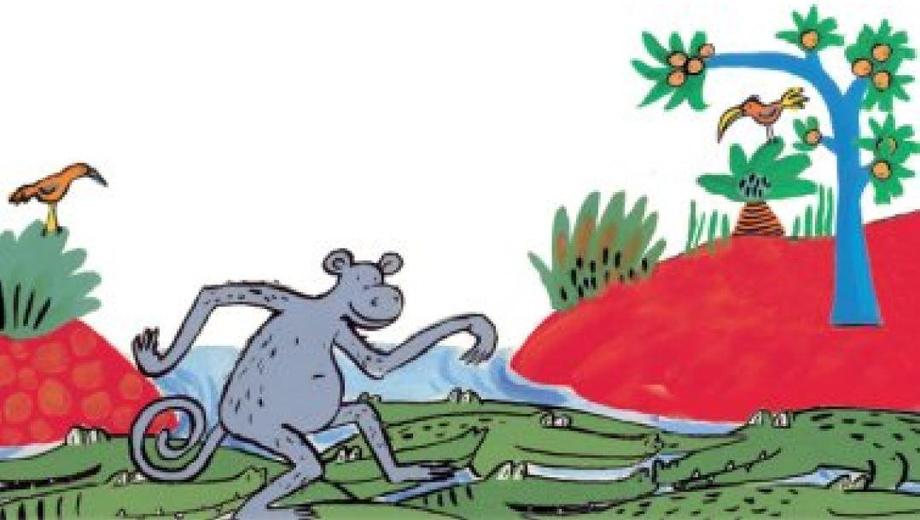 Then Crocodile swam up and down the river, telling his friends to come to a Big Crocodile Count.
It was not long before there was a great big tangle of crocodiles,twisting and turning, in the river near where Monkey sat.

7. Who did Crocodile talk to when he went up and down the river?

8. Which word shows that the crocodiles were in a muddle? Tick one.

“ALL YOU CROCODILES!” shouted Monkey.
“GET IN A LINE! SIDE BY SIDE!”
And the crocodiles swam around until they had made a line that
reached from one river bank right across to the other.
Monkey jumped on the back of the nearest crocodile and counted,
“ONE!”

9. How did the crocodiles get into a line? Tick one.

Monkey kept on jumping and counting until she counted
“TWENTY-NINE!” and with one last jump she was on the other side of the
river.

10. What did Crocodile think Monkey was trying to do?

11. What was Monkey really trying to do?