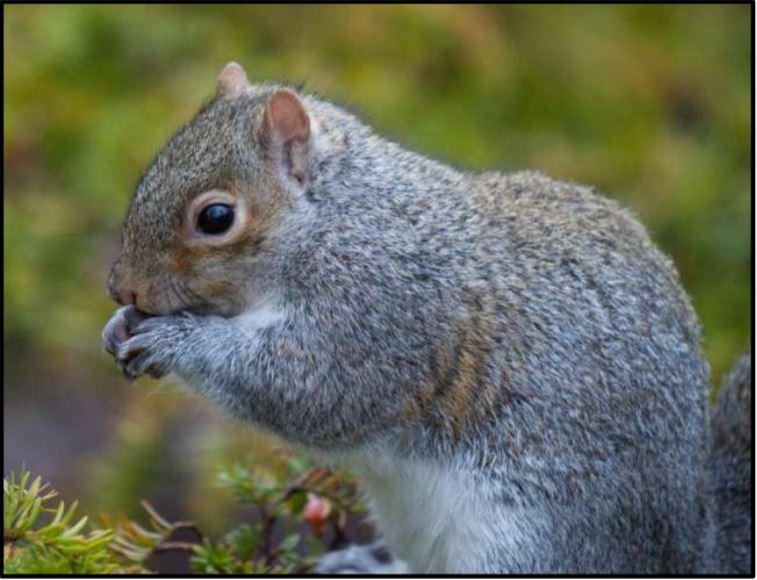 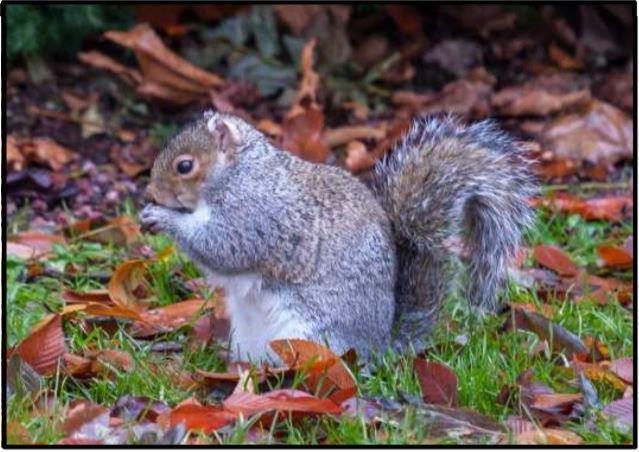 The Victorians brought the grey squirrel to the United Kingdom from North America in the 19th century. They are found in woodlands, parks and even in our gardens. You might see them taking food from bird feeders.

1. Who brought the grey squirrel to the United Kingdom?

2. Where would you find grey squirrels?

The grey squirrel’s fur is silvery-grey with a white belly. They are bigger than red squirrels. Their body can be 23-30cm long and their tails 19-25cm. The male is usually called a buck and the female is called a doe.

3. What colour is a grey squirrel?

They build nests, known as dreys, in trees. They are made using twigs and lined with leaves and mosses. A female grey squirrel can have two litters of babies a year, the babies are called kittens. When they are born they are blind, hairless and toothless and they need their mother to look after them until around 7 weeks old. They are ready to leave the nest when they are about 10 weeks old.

4. What is its nest called?

5. Where do they build their nests?

6. What is a baby squirrel called?

Grey squirrels eat a wide range of foods including seeds, nuts, acorns, pine cones, berries and fruits. They create many stores of food, which they can find days or even months later as they have a very good memory and sense of smell. During the winter they are not so active and they can stay in the drey for several days. They eat food that they collected during the autumn and have stored in trees or just under the ground.

8. Where do grey squirrels get their food from in winter?

9. How fast can a grey squirrel run?

10. Is the grey squirrel bigger or smaller than the red squirrel?

Mary and the Great Fire of London

By Sue Graves and Alex Paterson

Mary was walking home from the bakery in Pudding Lane where was worked. The year was 1666 and there had been no rain in London for ten months. Everywhere was hot and bone dry. Mary looked up at the sky. She wished it would rain but there were no clouds at all.

What is a bakery?

Where was the bakery?

What does ‘bone dry’ mean in the sentence 'Everywhere was hot and bone dry?'

Mary sighed and walked on. Her feet ached and she badly needed a drink. Mary liked working at the bakery. It was hard work but Mr Farriner, the baker, was kind. Every morning, Mary helped him light the bread oven. While Mr Farriner baked the bread, Mary kept the bakery clean. She had to sweep up the spilled flour. She had to take the baked bread from the oven. She had to put it to cool by the window. She had to serve the customers, too.

What was the name of the baker?

Name two jobs that Mary did at the bakery.

Mary lived with her mother at the bottom of Pudding Lane. Her mother looked up when Mary came in. She was busy making a pot of soup for their supper. “You look hot and tired,” she said. “Get a drink of water from the pail.” Mary gulped down the water and wiped her hand across her mouth “That’s better,” she sighed, taking some bread out of her basket. “Mr Farriner gave us this,” she said. “That’s very kind of him,” said her mother. “We’ll have it with our supper.” After supper, Mary rubbed her eyes sleepily and yawned. “It’s time you went to bed,” said her mother. “This heat is making everyone so tired.” Mary’s bed was in the corner of the room. It was made from a bale of straw and lay down. The straw felt cool and, closing her eyes, Mary fell fast asleep.

Where did Mary and her mother live?

What were Mary and her mother having for supper?

What is another word that could be used for 'pail'?

What words tell us that Mary was thirsty?

What did Mary's mother say was making everyone so tired?

Mary woke up with a jump. It was the middle of the night. She could smell smoke and people were shouting outside. Something was wrong. She jumped out of bed and woke her mother. Quickly they ran outside, but the smoke was even thicker here. Mary could hardly breathe. People were running along the lane, carrying leather buckets full of water. She looked up the lane. “Look mother,” she shouted, “It’s the bakery. It’s on fire!”

What made Mary wake 'with a jump'?

What were the buckets made from?

What was on fire?

How do you think that Mary felt when she woke up in the night Justify your answer with some of your own ideas and using evidence from the text.

What might Mary have been thinking when she realised the bakery was on fire? Justify your answer using ideas and evidence from the text.

What do you think Mary will do next?