Morning Y6. Throughout the week we will be writing our own narrative based on 'The Tale of Three Brothers' from Harry Potter and the Deathly Hallows. We are using some ideas and resources from the fantastic 'Literacy Shed'.

Begin by watching the YouTube video taken from the film and read the extract from the books itself.

The Tale of the Three Brothers (HD)

We will be working towards retelling the tale of three brothers from the point of view of Death.

Think about what writing from a character’s point of view means.

It means writing in role as a character – it will include the things they see, their thoughts, their feelings, their attitudes only. At the moment, when we watch the film it focuses on the three brothers. However, if we consider the Point Of View of Death at the beginning of the film – what would it be? What would he see? How might he be feeling?

We will be writing no ordinary narrative. The tale we tell will be in the form of a narrative poem. A narrative poem is a poem that tells a story but has no chapters. It uses rhythm and poetic language.

Today, I would like you to story map the narrative from Death's point of you. They will be the building bricks of their poems.

Use plain paper (A3 is ideal but anything you have will work too) for this. Draw the key images from the video in the correct order and begin to add words or phrases from Death's point of view. Once you have completed it, try using your story map to tell the story to someone at home.

Film stills to help you.

Follow the link below to explore what is meant by a narrative poem.

Today you are going to begin building up language for your poem and we will do this by thinking about figurative language we can use (personification, similes and metaphors).

Complete the grids below to come up with adjectives, similes and metaphors to describe the brothers and the objects from Death's point of view.

Use the similes grids to help you along a little.

These will probably take you a little time to complete to use today and tomorrow to add as much detail as you can. 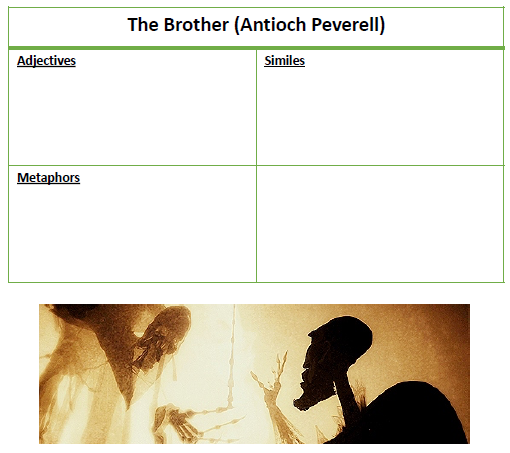 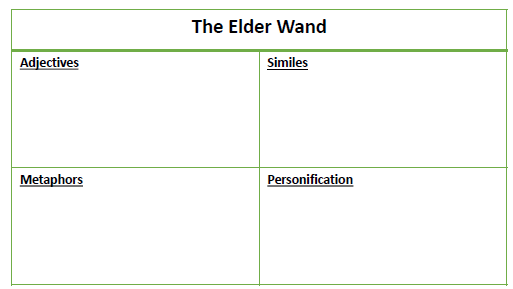 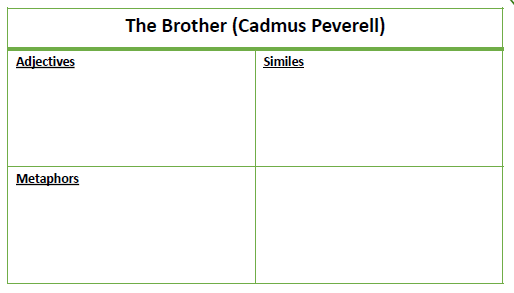 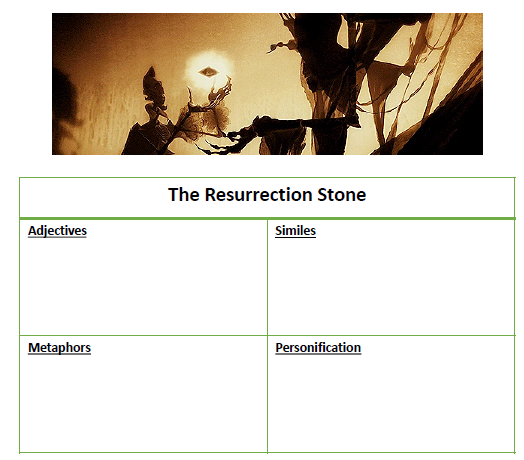 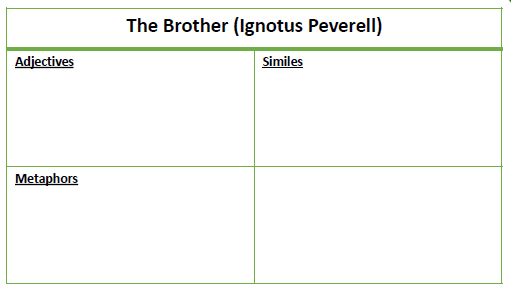 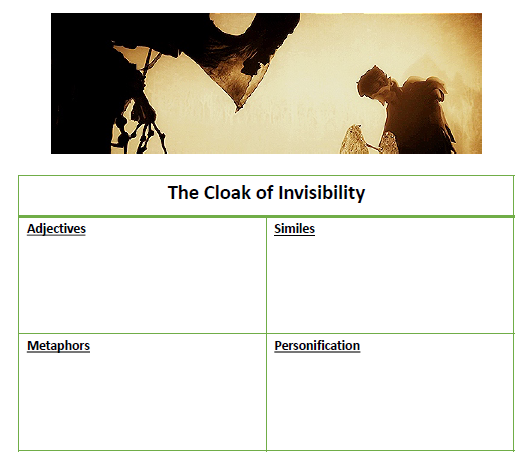 simile - it was as invincible and omnipotent as the wind

Look at the example below and think about how the structure of 'The Walrus and The Carpenter’ has been changed to tell ‘The Tale of Three Brothers’.

How have rhythm and rhyme have been used? Of course, not all poems will rhyme!

Task: Have a go at writing two verses for the second brother – this could use some repetition from the verse about the first brother. The boxes have been left blank on the sheet to show which verses you need to write.

Think about the need to rhyme with ‘hands’ – if this is tricky, what other words could we change ‘hands’ for? (fists, palms, grips etc.)

Begin by reading some of the examples of narrative poems below. You will need to a pick a structure that you like to base your own poem on. You may decide to use the one we looked at yesterday if you are finding it tricky.

Once you have chosen your poem, you can write your own version of 'The Tale of Three Brothers'

Have a go at performing your poem and recording it. I'd love to see them!